Welcome to the injury episode! In a continuation of last week, we wrap up the Colton/Tia relationship drama, and a looooot more between David and Jordan. Jordan can’t sustain the intellectual connection David thinks Becca wants—he does know she was with Arie last, right?—and Jordan thinks that David’s cooking is lame. Jordan does know a man who cooks is sexy, right? If I learned anything tonight, both guys are awful but at least Jordan brings some entertaining crazy to spice things up.

Check out our recaps of episodes one or two if you missed them!

Honestly, I don’t remember all of these girls names and the only two given much air time is Tia and Bekah (I hear Bachelor in Paradise bells!) 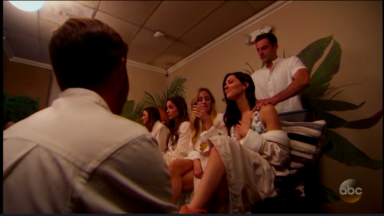 David and Jordan pamper Becca, and apparently Jordan is “in his element” giving foot massages?

In the evening, Jordan and David really duke it out… but the best and most entertaining part was how much Jason and Wills couldn’t keep it together, laughing into their drinks…

If Jordan didn’t want Becca to know he matched with 4000 women on Tinder in 2017 then… why did he tell the guys?

This will forever be my favourite moment of the season. The moment I realized I love Jason, even though Becca forgot his name.

Wills, Jason, Jordan, David, Jean Blanc, and Colton all get the first group date that tells them “it’s time to relax”—but only for Becca’s Arie-related friends who get pampered by all the boys.

Luckily for the producers, this means Tia is there for lots of uncomfortable glances between her and Colton. I would feel bad for him but it ends up going really well, rose included. When Tia and Becca sit down, it really sounds like Colton is a stand-up guy: he told her he’d signed up for the Bachelorette right at the beginning of their fling, they only ever kissed, and overall he sounds genuine and doesn’t change his story when talking with Becca. Well, as genuine as anyone can be on this show.

But back to the beginning of the date when BECCA FORGOT JASON’S NAME. I wouldn’t have handled that as well as Jason did and I would have thought that meant Becca wasn’t into him (I mean, probably still means that) but they were super cute in the evening and I loved how he brushed it off.

Then everyone got stuck into painting nails, giving massages, and overall having fun. All of the guys got their nails painted as well, and I loved that some of the guys were rocking bright pink (Jason) and fuchsia (Jordan) tones. In the evening, Jean Blanc steals her away within seconds—what a smooth salesman, after convincing all the other guys not to do exactly that.

And then… Cut to more of the Jordan/David drama: Jordan has over 4000 matches on Tinder even though he’s “very selective on swipes”. Ha! Then the quizzing starts—how long does he spend on the app every day? He can’t really be selective can he? How many people does he message or chat with after the initial match? Seriously, how.much.time? But David can’t let it go, instead wasting all his time with Becca on the subject. This strategy never works. Never.

When Becca brings David back to the group, she then “congratulates” Jordan on the matches, making him high-five her. I aspire to be as passive aggressive as Becca one day… she really threw both of them under the bus there. Jordan then calls David a bitch, they have a little whinging match while all the guys sitting on the couches try not to laugh (looking at Jason and Wills there… my adorable laughing babies), and Jordan talks over Becca during his time with her. I love that none of the other guys seem to be on David or Jordan’s side in all of this. Can we get that awful 2 on 1 out of the way, please?

Chris and Becca sit down for song-writing lessons

Chris gets the one on one that “makes your heart sing”. Becca isn’t a great singer and Chris is a bad writer, so they make a good team. At least they didn’t have to perform in front of any big audiences… But then we learn why Chris got all uncomfortable when song-writing—and not because he can’t read. Chris was shut down by his father who deserted him when he was young, so it makes sense he doesn’t want to be vulnerable. However… false vulnerability is a common theme on these shows so why would you sign up if you couldn’t express yourself? Once he finally opens up a little more, he gets the rose and wins Becca’s praise. I don’t know, one on one dates are a little boring early on.

Injuries at the Mansion 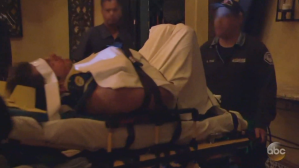 Back at the mansion, David is carted off in an ambulance after he was found slumped on the ground. Let’s be honest, it looked rather bad. Turns out… David fell off his bed? I guess that can put you in Intensive Care, somehow?

With all those cameras in the house, none of them were rolling in the bedroom to see Jordan push him? Really? All we get is Blake’s serious face describing how bloodied and bruised David was, and Lincoln jokingly saying Jordan did it—even though he claims he “wouldn’t hurt a fly”. You can’t wink after saying you’re innocent! That’s basically admitting it!

Boys get Rough at the Becca Bowl

Becca and Christon have a little fun while not running drills.

Becca joined in to run a couple drills herself… but she’s really just trying to see Leo’s butt right?

Let’s accept it: Lincoln cheats at games for absolutely no reason. He’s also really horrible at football, and footwork.

Poor baby Clay, before he broke his wrist.

The boys play the Becca Bowl… but this season we don’t have any solo time prizes for winning?

Clay, Leo, Christon, Ryan, John, Garrett, Mike, Lincoln, Connor, and Blake “we can tackle anything together” which puts Clay in his element. Unfortunately for Lincoln, he sucks at the drills and tries to cheat his way through again—but this time, Becca keeps him honest.

Leo, Garrett, Connor, Christon, and Ryan play a game against Clay, John, Mike, Lincoln, and Blake. Lincoln is absolutely awful, Garrett is pretty great, but the standout is obviously NFL boy Clay who ends up with an injured wrist. I know these boys are competitive, but you don’t need to be so full on that you jeopardize your career!

In the evening, Garrett gets some cute “tackling action”, Connor is definitely interested, and then Blake gets a little jealous. He called Becca his girlfriend while they were chatting and she wanted to take a nap with him… and although they seem to have an actual connection of sorts the rose still ended up going to Clay in the classic back-from-the-hospital surprise. How can his best date ever be the same date where he breaks his wrist and shares his girl with a bunch of other men. Clay must have a pretty awful dating record…

Nothing really matters in this cocktail party other than Clay’s sadness as he has to leave. For a second, I thought he was going to make the biggest mistake of his life by staying on the Bachelorette and not getting his wrist surgery, but PHEW he decided to leave. He was a sweetheart, but I just didn’t see him winning Becca’s heart in the end.

Next week, we’ll find out who stays and who goes before moving on to Park City, Utah and some Olympic dates. Get ready for snowmobiles, bobsleds, and that hot, hot lumberjack action. And for those of you playing our Fantasy League, check out how tonight has changed the points on our spreadsheet!